Sudoku is one of the most popular puzzle game ever invented that improves your brain and kills boredom. You can find Sudoku puzzles easily on magazines and newspapers. For someone, who is obsessed with Sudoku might find Sudoku given in the magazines and newspapers less in number or even less challenging. In that case, "Sudoku Generator" is an excellent tool for those who want to test themselves and improve their Sudoku solving skills.

Sudoku Generator is an online tool to generate Sudoku puzzle of different degree of difficulty. It creates 9X9 Sudoku Puzzles starting from easy to very hard level. Even further, it has the toughest "inhuman" level, which creates the challenging puzzle for even the expert or experienced Sudoku player. In case, you get stuck in the middle of the puzzle after putting you genuine effort, the solution can be obtained right there with just on click.

How to generate puzzle with Sudoku Generator

Sudoku Generator is a very simple and easy-to-use tool for generating Sudoku Puzzle online. To generate a Sudoku puzzle, just select the difficulty level from the tab given on the top of the Sudoku generator board. This automatically produces a Sudoku puzzle for you. To re-generate another puzzle all you need to click the "Refresh" button given below the board will reload a new puzzle for you every time. If you are a beginner then it's recommended to go with the "easy" mode first and gradually improve the difficulty levels. After giving your best effort, if you fail to find the solution, hit the "Solution" button to get the answer to the puzzle. 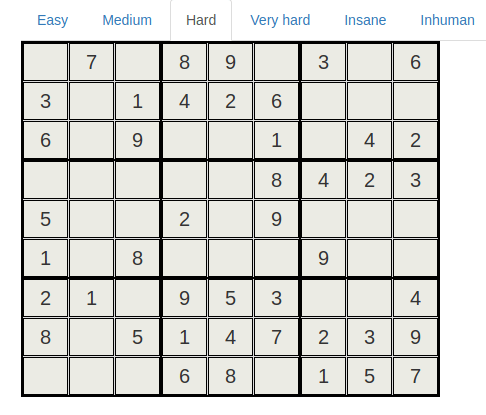 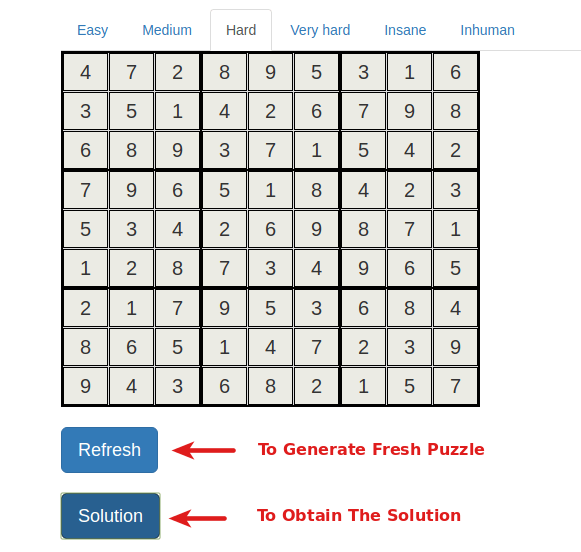 Fig-2: Soltuion of the generated puzzle