About Sudoku puzzle game and how to play?

Sudoku is one of the most popular logic-based number-placement puzzle game. The literal meaning of "Su-doku" in Japanese is "the number that is single".

The objective is to fill a nine-by-nine (9x9) grid with digits so that each row, column and 3x3 section contain number between 1 and 9, with each number used once and only once in each section. The Sudoku game players are provided with partially filled grid meant to be solved.

To solve sudoku one doesn't require the knowledge of mathematics but require the logic and reasoning. Solving Sudoku Puzzles daily helps with your brain. It improves the concentration and logical thinking. One can look for sudoku puzzles given in Newspapers or can play them online provided by many websites.

This website anysudokusolver.com is a free online automatic sudoku solver that solves almost any sudoku puzzle in matter of second. It applies Javascript, Brute Force method and Dancing Links Algorithm for quick solution. Ever tried but stucked on sudoku puzzles given in newspapers, magazines and online. You can use Anysudosolver to get its solution instantly and move further. Do not use this sudoku solver tool without giving your best effort while solving the puzzle.

The goal is to just fill the empty cells with the already known numbers according to the Sudoku rules or exactly as given in your puzzle that you want to solve.You must give the correct input, i.e only numbers between 1 to 9 and use the number once and only once in each row, column and 3x3 grid section. See *Fig-1.

Next, click on "Solve" button to get the answer instantly. Note, more than on solution may be possible. See *Fig-2. 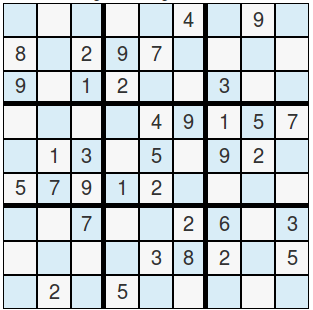 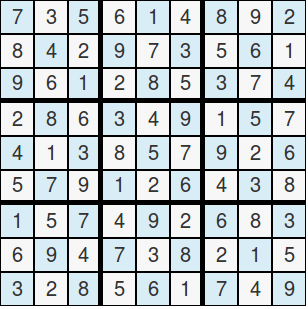 Fig-2: click on "solve" button to get it solved